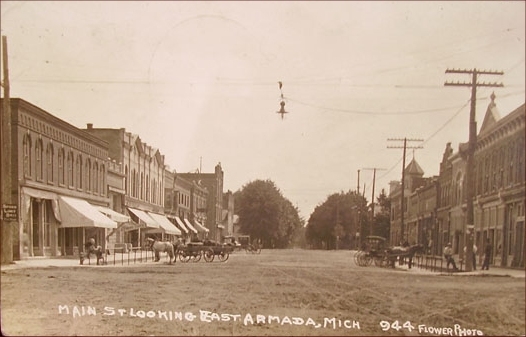 The first schoolhouse in Armada Township was situate on the land of Col. Perry, near Armada Corners, built of logs, cut and put up by a "bee", and covered with lumber donated by Noah Webster - 1000 feet. The deficiency was supplied with slabs. The name of the first teacher is not remembered. The second house was a log one, near the house of Alfred Goodale. A school had been kept in the barn of that gentleman by Miss Harriet Perkins. Miss Betsey Day, now wife of Erastus Day, taught the second school. This was in 1836. About this time, a schoolhouse was built at the village. This house was built of slabs stood up endwise, spiked to a frame made of poles, and covered with slabs. The first teacher in this school was a Miss Day, who came from Massachusetts, and soon returned to that State. The first male teacher in this school was George Lathrop, son of Solomon Lathrop, in 1838 or 1839. He was followed by Miss Amelia Bancroft, who was succeeded by Joseph Goodell. This young man was exceedingly tall, and it is said that when he jumped the rope with the children, his head appeared above the ridge of the building. Charles A. Lathrop was a teacher in this school. In 1843, Rev. S.A. Benton, who had lately arrived from Vermont, where he had received a classical education, had a class of seventeen pupils in the parlor of his home, in which he was assisted by Dr. J.P. Gleason. This lasted one term, soon followed by Rev. Eleazer W. True, a fully educated man from the East, who opened a private academy in a building erected for that purpose in the Southeast part of the village. This school was successfully conducted from 1848 to 1853, and was the last of the select schools of Armada.

Rev. Mr. Benton was pastor of the Congregational Church of Armada for several years; removed to Iowa where he died about the year 1870. Rev. Mr. True died in Armada Township in 1874. Of the teachers in the public school, it is impossible to even mention all. The following are some of them: Edwin Pettibone, Clark Hall, S.E. Whitney, ---- Stowe, E. M. Plunkett, A.S. Hall, ------ Kidder, A. M. Keeler. The first structure soon gave place to a frame building, and was superseded by a brick building. This was enlarged to meet the growing demands of the school, which is at present in a thriving condition.

Soon schools sprang up all around the township. By the time the schools were consolidated during the 1940s, there were at least 18 one-room school houses in separately organized districts. Now the Armada Area Schools encompass 76 square miles and parts of seven townships.

Armada and Armada Township have weathered the years in good stead. Within commuting distance of the greater Detroit Metropolitan area, Armada Township is now one of the fastest growing areas in the entire tri-county area. Today Armada is a bustling agricultural region known for its orchards, its flea market, and its county fair. These have ceased to be purely local events in recent years, and now attract a metropolitan audience. Even with its growth the township and village of Armada has retained its country charm.

Armada Township is a rural, agricultural community located on Macomb County's northern border with St. Clair County. It sits between Bruce Township and Richmond Township with 32 Mile Road as its southern border. Originally organized in 1832, the Township developed as an agricultural area. Today, it embodies a delightful rural character with a mixture of small farms and residential areas, including the Village of Armada. The area is noted for its prominent apple orchards nestled among small hills and the winding turns of Coon Creek, which flows through the area.