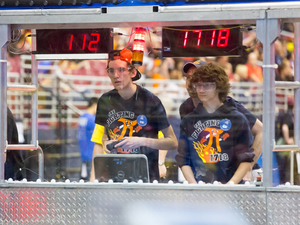 Our award winning programs include:

In 2015, one of 36 districts in the U.S. to be named District of Distinction Award winner for our #ACCEPTED college readiness program due to 96% of our students going on to college.

Armada High School is ranked 2nd in Macomb County out of 28 high schools in the Michigan Department of Education's Top-to-Bottom list for the 2013-2014 school year.

In 2015 the MA²S Robotics Team, The Fighting Pi, were winners of six awards:

In 2014 the MA²S Robotics Team, The Fighting Pi, were winners of six awards:

The MA²S Robotics Team, The Fighting Pi, were winners of three awards in 2013:

Krause Early Elementary was recognized by the Michigan Department of Education in 2012 as a "Reward School."

In 2012, Krause Elementary was recognized as a Michigan "Green School."

In 2009, Armada Area Schools was one of fourteen districts statewide to be awarded as a demonstration site for Project ReImagine, which meant we serve as a model for innovation in education.